Of course, there are so many routes countries can take to achieve energy sustainability, and even more factors that could make or break those initiatives. ACEEE’s rankings, however, make it clear that a commitment to realistic and holistic energy efficiency regulations are an essential part of the overall process.

How Do the ACEEE Rankings Work?

Together, these countries represent 75% of all the energy consumed on Earth, and over 80% of the world’s gross domestic product (GDP). Each country’s energy efficiency regulations are evaluated and scored, as well as how efficiently energy is used in its buildings, industry, and transportation sectors. In the 2016 rankings, the maximum possible score for a country was 100, with up to 25 points awarded in 4 categories: national efforts, buildings, industry, and transportation. This year, Germany earned the highest overall score with 73.5 out of 100 possible points. It also scored the most points in the national efforts, buildings, and industry categories to earn the top spot on the ACEEE International Energy Efficiency Scorecard.  Germany earned the maximum possible points for spending on energy efficiency (319 USD or 295 EUR per capita), highlighting the government’s dedication to reducing overall consumption.

It’s also worth noting that Germany has gone above and beyond the European Union’s Energy Efficiency Directive to increase energy efficiency from 2008 levels by 20% by 2020. The country intends to achieve a 50% reduction in energy use by 2050 over a 2008 baseline.

With a score of 68.5, Japan and Italy tied for second place in overall energy efficiency leadership.

Japan’s performance results from high scores on thermoelectric-efficiency as well as high levels of investment in R&D and tax incentives. Further, Japan’s energy intensity decreased by 21% between 2000 and 2013 (due in part to the Fukushima nuclear accident of 2011).

Italy has demonstrated a commitment to energy efficiency in its industrial sector by establishing mandatory energy savings targets in factory plants, and mandating periodic energy audits. Italy is also among the countries with the largest share of installed CHP capacity, due in part to its policies and regulations to encourage CHP deployment.

France came in 3rd place, trailing Italy and Japan by only 1 point. Like the rest of the EU countries, France stands out for its aggressive national energy savings targets as well as programs such as loans and tax incentives to encourage private investment in energy efficiency.

France has also realised significant energy savings by implementing building-related energy efficiency policies, such as the Energy Efficiency Action Plan that will increase the number of low-energy buildings and commits to the deep renovation of 500,000 dwellings per year. France has also made a commitment to reduce overall energy consumption by more than 17% by 2020.

2016 proved to be a challenging year for the United Kingdom in terms of energy regulation and climate policy (and not only because of Brexit). The government decided to roll back several energy efficiency regulations, including a cancellation of the 2015 Green Deal.

Still, the UK still has some solid programs and policies dedicated to energy efficiency relative to other countries around the world. In fact, there is hope that they may retain some of these despite the vote to leave the European Union.

Most of the countries that scored well on the policy metrics have some sort of unifying national energy reduction goal in place. In the case of the European Union, the ACEEE recognises that its directives are the driving force behind the policies evaluated in the Scorecard report. But because each EU country is free to interpret those directives as they wish, they were scored on their individual actions.

In order to compare countries, the ACEEE combines utilities spending and national government spending into a single expenditure. While this metric does not measure how effectively the money is spent, it is an indication of overall commitment to energy efficiency.

Which Countries Are Most Committed to Energy Savings Goals?

Energy efficiency investments more than pay for themselves over time, but the upfront cost of the technology, upgrade, or program is a common barrier.

Government subsidies, loan programmes and tax credits can help lower or spread out these upfront costs, which better equips projects to pay back their costs. These incentives can also make market conditions for energy efficiency more amenable to attracting additional private investment. In this category, France earned the top spot overall:

Countries with the Biggest ESCO Market

According to the ACEEE, the presence and size of the ESCO market in a country reflects the efforts to advance energy efficiency through effective business models and creative financing.

For the uninitiated: ESCOs are companies that manage energy efficiency projects. They serve as project developers for a variety of tasks and take on most of the performance-related and technical risks associated with energy management projects. Their activities might include: energy project design, development, financing, installation of hardware and metering equipment, and the measurement, monitoring and verification of energy savings.

For the 2016 Scorecard, the ACEEE measured the size of the ESCO market in each country relative to their GDP, with the following results:

Couldn’t find your country on any of these lists? Wondering what kind of laws or regulations are being enforced in the country you’re working in?

Download our latest free guide to see what kind of energy efficiency regulations are in place there: 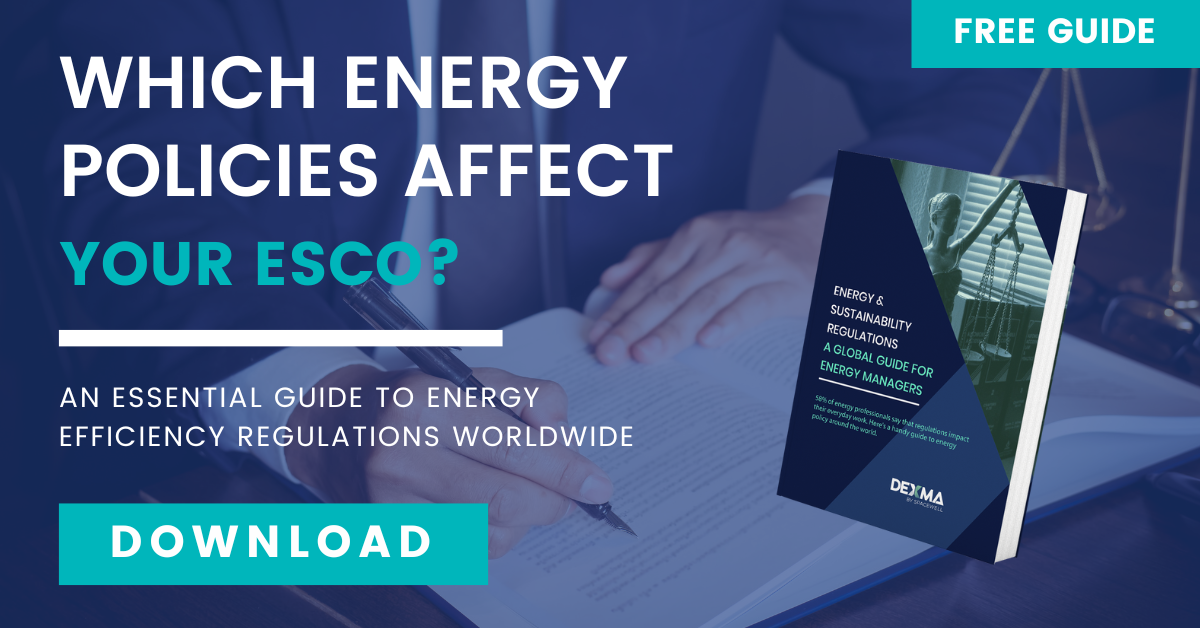